The study for the City of Raleigh was an evaluation of existing conditions with respect to the placement of bus stops and shelters including compliance with the Americans with Disabilities Act and development of a guidebook regarding principles, guidelines and standards for bus stop placement, design and performance.

The initial task was to develop an existing conditions report thoroughly investigating and evaluating each bus stop along two heavily traveled routes designated as “Transit Intensive Corridors” within the City’s CAT system. Each stop was evaluated from the perspective of placement, signage, access paths, including incorporating all of the design criteria used by peer systems and advocacy organizations, such as Easter Seals Project Action. 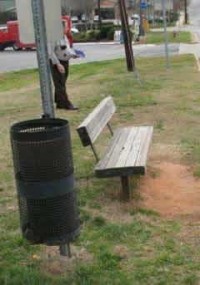 As part of the investigation and evaluation process, various shortcomings were identified including safety, lighting, amenities, access to nearby origins/destinations and ADA requirements. Improvements were then recommended with respect to the existing deficiencies using plans, drawings, cross sections etc.

The results of the field investigations were then incorporated into the development of guidelines for the City to use in the planning and development process as well as to assist CAT staff in creating consistent bus stop and shelter criteria for modifications to existing services or in new route implementation. Other input included the potential use of information technology, such as kiosks, electronic information signs, etc., based on current practices within the industry.

Another set of recommendations were created to be used by the City as part of the private sector site plan development and zoning change process. Practices that had been developed in other locales were presented and reviewed regarding potential applicability in Raleigh. The overall intent was to create a template for the city of Raleigh to be used by private developers during site development. Another related task was to consider the use of private sector work crews to maintain and clean the stops and shelters.

The final product was a Guidebook that incorporated all of the design aspects discussed above.