This assignment began by performing a regional BRT assessment for both Santa Cruz METRO and MST, followed by the initial planning analysis for an onstreet Bus Rapid Transit project in the Fremont/Lighthouse corridor using the FTA Very Small Starts planning process and guidelines. That analysis included routing, station location, Transit Signal Priority including use of queue jumps, and input regarding branding, sponsorship, etc. Following completion of that study, a Very Small Starts grant application was developed which was approved for funding by the FTA in the FY 2010 federal budget.

As Program Manager for the BRT implementation the team served as adjunct MST staff, to oversee the development of the design plans, adhere to the FTA reporting process and chair the Technical Advisory Panel, consisting of representatives from all affected jurisdictions. 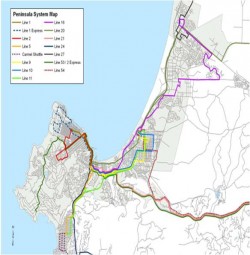 This study advanced the implementation of BRT principles in the Monterey Bay area by establishing a preliminary vision for a regional plan for BRT service that would connect with other planned and existing transit projects in the region. As a result, mobility options could be enhanced for those traveling both short and long distances within Monterey and Salinas counties, and also connecting to other destinations outside the region.

Study elements included corridor specific planning and evaluation, including routing, Transit Signal Priority, and other BRT attributes. Estimates of before and after travel times were made using computer simulation. Meetings were also held with stakeholders and affected parties.